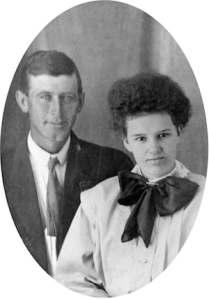 How did your grandparents meet?  You might find clues in the census.

William Franklin Alexander married Loula Isabella Richardson on July 13, 1910, in Moore County, N. C.  (On the left is their wedding portrait.)  In May of that year, the census said he operated a shingle mill and was a boarder in the John D. Richardson household.  John Richardson was a farmer, and other records indicate that he  owned a saw mill.  His daughter Loula and her sisters were employed on the farm at the occupation of “chopping,” while their brothers did plowing.  Adjacent to the Richardson household on the census page was George Morgan, who was a laborer in the shingle mill.  In the same year, Loula’s sister Pearl would elope with George.  Two of her nieces told me that she slipped out of the house at night, with the help of some female cousins of the McDonald family.  George drove his buggy to Virginia, where they married across the state line.

Like many contemporary couples, these people met at work.  The shingle mill was located on the farm, and Frank actually lived in the household of his future wife.

Last fall, at the North Carolina State Fair, I saw a steam-powered saw mill in operation, which was probably similar to the one used by Frank and George for cutting wooden shingles for roofs and siding for buildings.