September 25th, this week, was “World Lung Day.”The World Health Organization, concerned about a world-wide epidemic of tuberculosis,  got a hearing this week at the United Nations to ask for funding to fight the leading infectious killer of human beings in the world today. 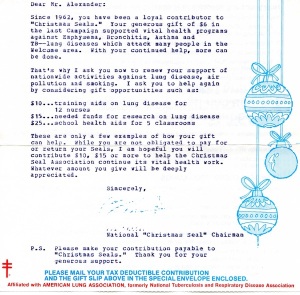 The United States gained control over the disease during the mid-20th century, after the introduction of antibiotics and x-rays. I remember the mobile x-ray unit that used to visit the county seat at least once a year. My mother and other people with family members who had the disease were required to get a yearly x-ray so that the illness could be promptly diagnosed and treated. My brothers and I would wait in the car on the courthouse square while she stood in line.

Apparently this was a common experience all across the U. S. The American Lung Association raised money from the sale of Christmas and Easter Seals, stamp-like stickers you could put on your cards and letters, advertising the organization’s efforts against “lung diseases, air pollution and smoking.”

My mother’s half-sister, Reba Oakley, and Reba’s mother and grandfather, from Surry County, N. C., all died of tuberculosis. In 1912, when Reba was born, T. B. was causing more deaths than heart disease or cancer, and The American Lung Association was less than a decade old. Reba’s mother died of the disease only 3 years later.

Reba’s grandfather, William Tyson Snow, had already died in 1906, of “consumption,” as it was called then. The family apparently believed that the infection was latent in Reba’s lungs for decades. She became ill as an adult and was treated at a state sanitarium for several years, before succumbing to the debilitating effects of T. B. at age 34.

A latent infection from T. B. is now said to be very rare. It is possible that Reba was infected as an adult. However, because of her infection, her family were all required to be x-rayed yearly for several years. Fortunately, they all remained healthy.

Poverty contributes to the prevalence of the disease in Africa and Asia today. However, it’s easy to forget that only a century ago, many of our own citizens were working on subsistence farms and spending long days in textile and other factories, where their exposure to lint and other air pollutants made them sick. As unemployment and homelessness grow in our population, so do diseases we often consider misfortunes of the past.

More about Reba Oakley and family:

Esther Johnson of the Surry County Genealogical Association commented, concerning the Mt. Airy Granite Quarry: “That was one of the things that happened to people who worked in our Quarry here in Mt. Airy. Everyone at school had to take a test for TB.”