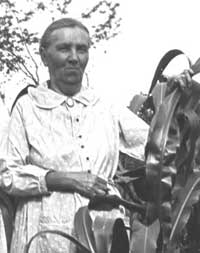 My grandmother’s mother, Martha White Johnson, told her children and grandchildren that she was part Indian. Many of us have this kind of anecdotal evidence of Native American ancestry, and with access to DNA tests, we are starting to find out the truth. So far, no relative known to me has had Native DNA results. However, the matter is still not settled.

What I did find in historical records are applications made by three of Martha’s siblings, around 1907, for benefits based on Cherokee kinship.

An act of Congress in 1906 appropriated over a million dollars to pay claims of the Cherokee Nation against the U. S. government, having to do with the Cherokee Removal of the 1830’s. A man named Guion Miller headed a commission to evaluate those claims. The commission received applications representing about 90,000 people, and they approved only about a third. Only 3,203 of them lived east of the Mississippi River; the majority lived in Oklahoma.

In the White family’s applications for benefits, they attempted to prove that they were descendants of a person who was a member of the Cherokee Nation.

Joseph Bill White of Mt. Airy, N. C., Martha’s brother, applied on behalf of his seven minor children. In a deposition taken in 1909, he swore that his grandfather, Pryor May (who lived about 1801-1879,) was the son of John May, whose father, name unknown, was a full blooded Cherokee. Joseph said that his mother, Mary Ann May White was one eighth Cherokee Indian blood, and that his great-grandmother was a Cherokee Indian squaw whose name he did not know. Joseph had always heard that Pryor May was kin to the Cherokee Indians. He further said that he had seen Pryor May, and that he was a tall, slim man, with a very dark complexion and black hair.

Joseph and Martha’s brother, John W. White of Round Peak, N.C., claimed that John May, father of Pryor and husband of Rachel May, “was said to be one half Indian.” In a deposition at Pilot Mountain, N. C., in 1908, John said that Pryor May got his Indian blood from his paternal grandmother, and that Pryor told him many times that his grandmother was Cherokee.

Martha’s sister, Mary White Chandler, of Round Peak, N.C., also applied, corroborating what her brothers said, that their grandfather, Pryor May, was a full blooded Cherokee.

A man named J. F. Edwards, also an applicant, affirmed that he knew Pryor May in Patrick County, Va., where they both lived until May’s death in 1879. He said that Pryor May claimed to be part Cherokee and that his appearance “showed his Indian blood,” as did that of Pryor’s son, William May. Edwards stated in a deposition that the May family consistently claimed Cherokee heritage.

Joseph’s application was rejected because it did “not appear that any ancestor was ever enrolled or that any ancestor was party to the treaties” of the 1830’s. “His ancestors did not live in the Cherokee domain.” He failed to prove any “connection whatever with the Eastern Cherokees.” John and Mary were also rejected, as their statements were not sufficiently backed with written records and they “never lived in Cherokee Country and kn[ew] nothing definite of alleged Cherokee ancestors.”

There is another, as yet unproved, family rumor that the wife of Pryor May, Susanna Puckett, came from the Powhatan reservation in Virginia. The Powhatan were the people who greeted the Jamestown settlers in the early 1600’s, and were the tribe of the famous Pocahontas. The Whites, Mays, Johnsons, and other English families sailed to the coast of Virginia and gradually made their way westward and southward to settle along the Virginia/North Carolina border.

The White family seem to have been convinced of their ancestry and were not solely motivated by possible financial benefits. My mother told a story about her White relatives approaching her parents for documentation of their ancestry. This would have happened decades after the Guion Miller applications. Apparently my grandmother had nothing to offer them, and my grandfather was annoyed with them. In a time when non-white ancestry could bring mistreatment, many people preferred to forget their origins. Now, when we have nothing to fear from knowing the truth, my generation would really like to know about our ancestry. We’re still looking.

My Grandma’s mother, Martha White Johnson, told her grandchildren that she had Indian ancestry. My mother said that after her parents moved to the Sandhills, some kin from the mountains came to visit, with the purpose of finding some proof of their Native ancestry. Her father refused to talk with them and made them leave. My sister told this story to someone with Native connections, who explained to her that people with non-white ancestry were often refused credit at the banks and stores. As a farmer, Grandpa would have depended on credit to keep him going until he took his tobacco to market and received whatever cash he was going to make for the year. Unfortunately, if he or Grandma had Native ancestry, it was not to their advantage to prove it.

Mama repeated a lot of stories that were told to her when she was a child. When one of us children was crying, she would tell us that the old folks used to say when the Indians were hiding from their enemies, they would stop the babies from crying by covering their noses and mouths so they couldn’t breathe. If anybody made noise and they were discovered, they’d all be killed. She teased that if we had been Indians, we wouldn’t have survived.

Now I wonder if this story came from the Indian Removal of the 1830’s, when Native Americans of many tribes were forced to leave their homes in the Southeastern states and move to reservation land in Oklahoma. Some people managed to hide deep in the mountains and woods long enough to stay behind. Martha White’s great-grandparents, John and Rachel May, could have done just that, as they lived in mountainous and sparsely populated Patrick County, Virginia.